In dairy systems the profitability of grain feeding is measured as the additional milk produced for each kilogram of grain that is fed. This is expressed as the additional grams of milksolids (MS) produced per kilogram of dry matter (DM) of grain fed - and is expressed as gMS/kgDM. This response is described as the short-term or immediate response - because it is measured within a few days following the commencement of feeding.

Grain feeding will also produce a long-term response. This response can be measured as an increase in the average body condition score of a herd over time, or as improved in calf rates in a herd. Long- term responses to grain feeding are not typically acknowledged by farmers as it may be several months, or even years, before these benefits are turned into cash flow. However, the long-term response to grain feeding can be just as profitable. As an example, one condition score put on in one season could produce an additional 15 kg of milksolids the following season - if it was milked off the cows back. 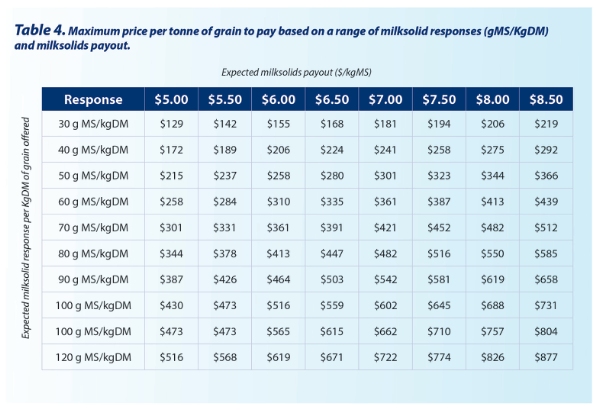